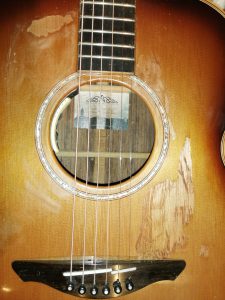 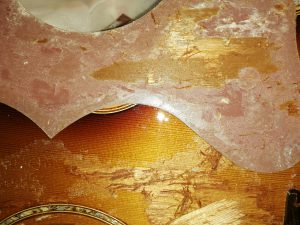 This Avalon guitar repair job resulted from a couple of circumstances that combined to leave the customer with this badly scarred guitar top.

What happened was that the owner’s son put a slight score on the face above and to the bridge end of the soundhole.

The owner then decided to do a guitar repair by adding a pair of bookmark matched pickguards in the style of the Bob Dylan Martin.

The guitar had already been previously re-finished by Avalon.

The problem started when the customer attached the pickguards without first of all preparing the surface by cleaning/priming it with something like white spirit or rubbing alcohol/methylated spirit.

When the pickguards didn’t stick properly, he then broke the golden rule which is: “Don’t make any change to your instrument that can’t be reversed at a later stage”

i.e. if you add anything to your guitar don’t, for example, use a superglue type adhesive.

The customer then tried to stick the troublesome pickguards down using various adhesive ranging from all purpose glue to superglue and still the pickguards had lifting edges and glue residues that had oozed out of the edges.

Removing the pickguards proved problematic to say the least and, despite using various methods such as heat, glue solvents etc, some surface damage was caused during the removal. You can see part of the topface came away with the pickguard.

After removing the pickguards and cleaning surface I had to apply a skimmed layer of filler to give a smooth & flat surface onto which the pickguards could be re-attached.

I managed to save one of the pickguards but the other cracked during its removal and therefore had to be replaced.

After filling and sanding the areas of the topface, I had to touch in some of the colour in areas around the edge of the pickguards.

Then the surface was well cleaned down leaving a residue free surface.

I fixed double sided tape across the total surface of the salvaged pickguard and re-attached the pair of pickguards.

After a clean down and polish, here is the result. You might think the filler etc would affect the guitar’s tone but, when you’re applying 2 pickguards, this really isn’t a major factor. 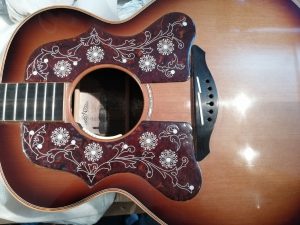