About 40 years ago I sold my prized Hofner President guitar and have regretted it ever since.

I have a 335 semi hollow-body but wanted a full hollow-body guitar again but i was reluctant to invest the cost of a Gretsch.

So I decided to make my own guitar. Hence my Gr style hollow-body guitar.

I’ve had this project kicking around the workshop for a few months now. Lockdown gave me the opportunity to catch up on this and a couple of other projects that I’ve had laying around for a while.

These days, I don’t make so many bodies and necks because its difficult to recover the cost of the time invested in making them.

So I tend to buy  them in. There are some very good bodies and necks at reasonable prices these days.

The most cost effective way to get the neck and body is to by a kit.  That’s what I did in this case. Generally I take the body and neck from the kit.

A lot of the hardware in kits can be quite low quality so I generally discard that.

However in this case, the hardware seemed good so I used it, apart from the pickups.  I stripped those down and remade them, handwinding my own coils.

I finished it in Capri orange with a black headstock.

Quite happy now with the result although finishing the body that already had binding fixed to it was a real pain.

There is narrow binding around the F holes but I decided just to lacquer over them.

I masked the edge binding with flexible masking tape that goes on smoothly around curves etc.

When I removed it, there was a bit of lacquer bleeding under the masking tape. I removed these over-spills of lacquer using my Japanese knife that has a razor sharp edge.

So, that’s it finished – plays well although, when you’re used to playing Strats etc, the full hollow-body guitar takes some getting used to.

Now, on to the next part finished project. 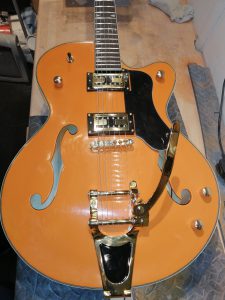 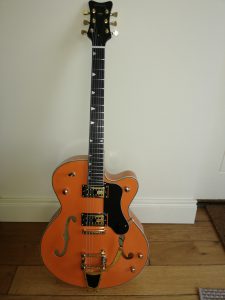